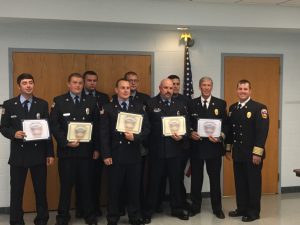 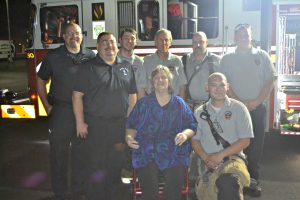 On September 6, 2017 at approximately 18:02 hours, Company 30 was dispatched to a medical assist for a cardiac arrest located at 306 Raven Court, Mechanicsburg, PA.  Lt. Justin Kohr, acting as Duty Chief 30, went responding and arrived on the scene just moments after the dispatch.  Lt. Kohr evaluated the patient confirmed that she was in cardiac arrest, and quickly initiated CPR while notifying HQ of his actions.  Being in the immediate area, having heard the initial dispatch and Lt. Kohr’s update, Cumberland County Emergency Dispatcher, John Kibe, responded and arrived on the scene where he took over compressions after Lt. Kohr had administered 500 high intensity compressions to the patient.  While Mr. Kibe continued compressions, Lt. Kohr assembled the bag valve mask (BVM) and then put it into service.

Medic Jon Fisher arrived on the scene, set up the AED, placed the pads on the patient, and administered one shock as advised; CPR was continued by Mr. Kibe.  Hampden Ambulance 1-71 arrived with EMTs John Tinari and Brian Smithmyer followed shortly thereafter by the arrival of SQ-30 and C2-30 (Hoffecker).  EMT Tinari installed an esophageal airway, Firefighter Tony Baker took over compressions for Mr. Kibe, and Firefighter Stromelo relieved Lt. Kohr with BVM operations.

E1-30 arrived on the scene and Firefighter Kinch briefly relieved Firefighter Baker before the patient was packaged, lifted, and moved to Ambulance 1-71 for transportation to West Shore Hospital.  During the life saving efforts being delivered at the scene, the patient regained a pulse and had labored breathing.  During the trip to the hospital, CPR and oxygen continued to be administered by EMT Tinari and Firefighter Baker.  Upon arrival at the hospital, the patient had a pulse and was breathing but she was still in serious condition as Emergency Room personnel took over.

Lt. Kohr spoke with the family 24 hours after the incident and they reported that the patient was in the intensive care unit and was responding to treatment and improving.  Lt. Kohr spoke again with the family on September 21st and they advised that she had been moved to rehab where they expected her to make a full recovery and be released within seven to ten days.  On September 25th, the patient successfully returned to her home where she is now resting comfortably.

In addition to the members of Company 30 that assisted directly with treatment as specified above, the following members were on the scene and played multiple roles that also contributed to the success of the incident: